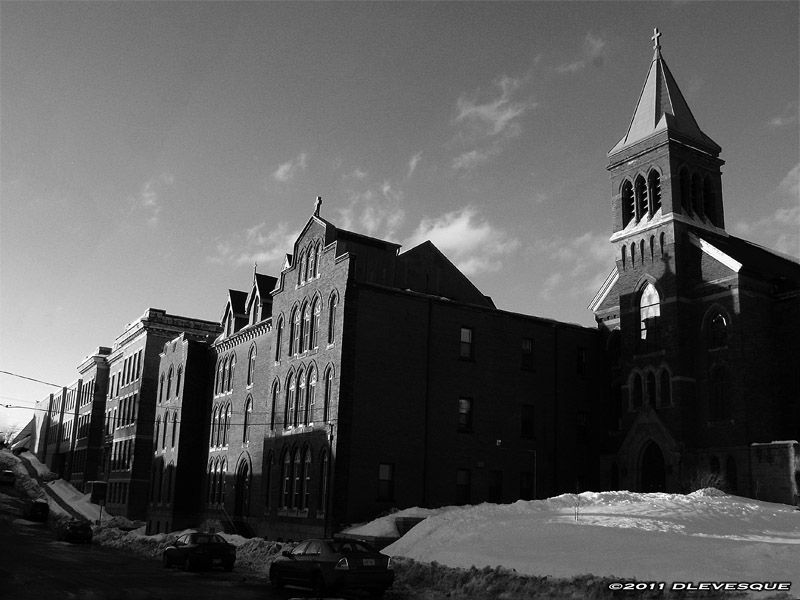 The small community occupied a temporary house on Cliff Street in Saint John, until the building of their permanent complex on that street in 1865. This housed the resident Mother General, the professed sisters, the novitiate (novices), the postulants, the orphanage, an elementary school and, by 1892, a high school.

The Cliff Street Motherhouse with its many other functions was the busiest house in the community, modeled somewhat on the physical characteristics of what the founders recalled about the Sisters of Charity Motherhouse in New York.

The light in this beautifully framed shot is gorgeous Don! What a wonderful history surrounds these grand old buildings. Glad to see they are maintained. ;-)

A beautiful B&W image. I love the architecture. Wonderful light and shadows on the building. The composition is spot on and works so well here. Bravo!

@✿ Anina ✿: Thanks Anina! Went by this building in the late afternoon, took a colour and bw photo. I liked the bw better.

this is a great one! why? the bw is the perfect choice, the use of light and shade is exceptional, and the perspective is very effective!

Wonderful perspective. Are these buildings still in use??

@Georgie: Thanks Georgie! A great part of it is still used. Many of the Sisters of Charity still live here, there's a gym and rec centre that is used often. Different types of classes are also taught here.