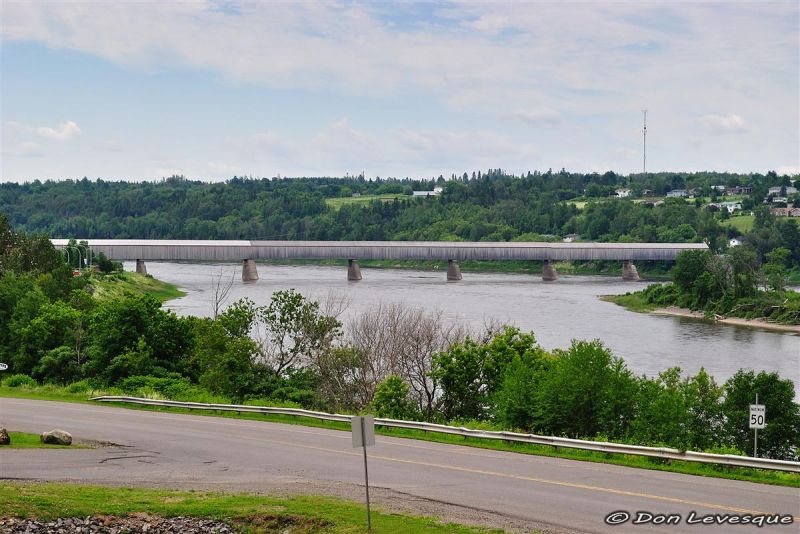 Posted by Don Levesque (Saint John, Canada) on 20 July 2011 in Architecture and Portfolio.

A little promise I made to Eric Cousineau awhile back, check my comment HERE.

This is what you see as you leave the highway and enter the village of Hartland, New Brunswick, Canada.

The 1,282 foot (391 m) Hartland Covered Bridge is the longest covered bridge in the world. It was originally constructed by the Hartland Bridge Company, which was formed by citizens on both sides of the St. John River, and officially opened July 4, 1901. It crosses the Saint John River from Hartland to Somerville. The framework consists of seven small Howe Truss bridges joined together on six piers.

The bridge was purchased by the government of New Brunswick in 1906. Two spans of the bridge were taken out by river ice April 6, 1920, and the government made major repairs and covered the structure in 1922.

A wonderful capture of this amazing bridge. Wonderful shades of green. Well captured and presented.

Wonderful panorama and your high vantage point helps the view. Great capture of this remarkable bridge and very interesting information as well. For the start of the series, this is certainly an excellent establishing shot.

@Stephen: Thanks Stephen! Hope you enjoy the series.

What a beauty! I've seen a few covered bridges but none that long.

interesting story to go with this imposing photo, don! looking forward to the series!

@franz: Thanks franz! Hope you enjoy the series

This is stunning Don! This grand view of the bridge is a wonderful into to the series! I can hardly wait for tomorrow's installment! ;-)

@Eric Cousineau: Thanks Eric! I hope you enjoy the series.

Amazing length to this covered bridge!

@myky: Yes it is quite long!

An interesting explanation on this bridge

Are you and Eric having dueling bridges? ;-) Interesting shot.

@Anne: Thanks Anne! Your comments are very appreciated.