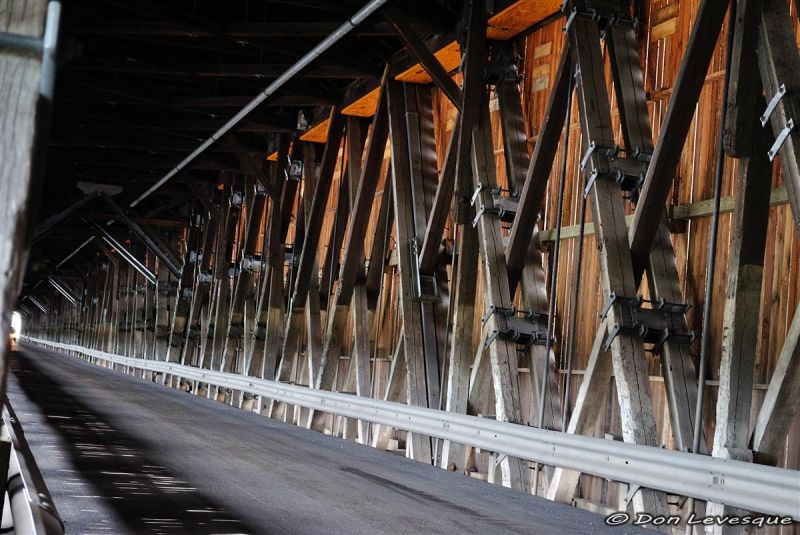 Posted by Don Levesque (Saint John, Canada) on 23 July 2011 in Architecture and Portfolio.

Photo taken from the pedestrian walk.

Yes... You can drive across the Longest Covered Bridge in the World at Hartland, but there are certain vehicle restrictions which do apply

In the early years snow had to be hauled and placed on the floor so the sleds could easily travel on it in the winter.

There is also a legend, which developed during the years when this covered structure was used mainly by horses and wagons.

There was of so much concern by the general public that there was great opposition when they talked of covering the bridge. Sermons were even preached on how a covered bridge would destroy the morals of the young citizens. Their concerns were heard, but not heeded and the bridge was covered.

It is said that young men trained their horses to stop about half way across the bridge. The horse would wait until the couple shared a couple of kisses and then it would continue to the other side of the bridge.

This is spectacular Don! The repetitive patterns and the warmth of the wood are compelling! Nicely captured! ;-)

love these stories about the bridge ... and the angle from which you took this picture! both add to the appeal of the structure!

Beautiful on the outside,beautiful in the inside! Great framing and angle! Thanks for the info.

Nice patterns. Your explanation makes sense if the trusses are built out of wood. Most bridges I've seen have metal trusses, so deterioration isn't an issue.