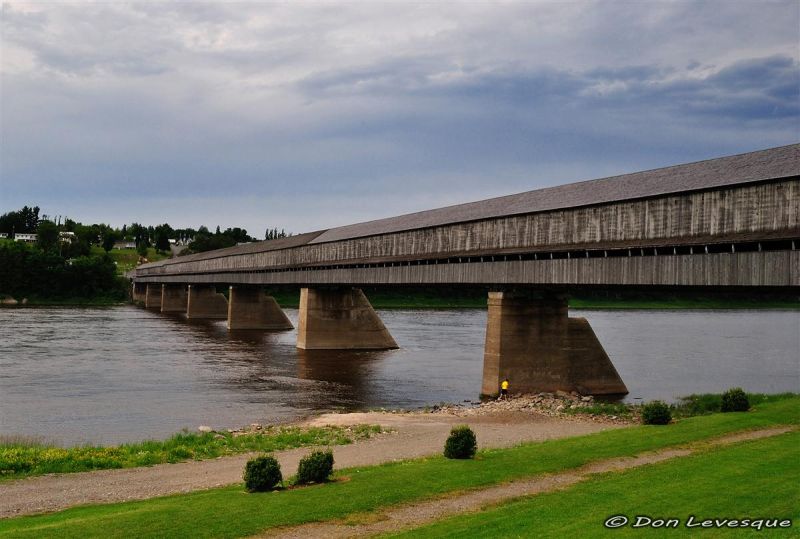 Posted by Don Levesque (Saint John, Canada) on 25 July 2011 in Architecture and Portfolio.

Looking the length of the bride. Last in the series

The Olympic torch was carried through the bridge as part of celebrations of the 1988 Winter Olympics held in Calgary.

On September 15, 1999, the bridge was declared a provincial historic site.

Festivities celebrating the 100th Anniversary of the bridge were held in 2001.

The longest covered bridge in the world is also a wishing bridge. When you enter the bridge, you make a wish, close your eyes, cross your fingers and hold your breath. Make certain you are not the driver! If you can do this for the entire length of the bridge, your wish is very likely to come true. This tradition is as old as the bridge.

Don these bridge shots have been terrific. A wonderful structure that has carried so much history.

Fantastic shot to close a great series, Don. I like the tiny figure of the jogger we can see in the frame - really highlights the scale of this historic bridge. Marvelous 'lucky' tradition you describe as well!

This has been a wonderful series Don! This long look is a wonderful parting shot! Congratulations!! ;-)

@Eric Cousineau: Thank you very much Eric! I'm glad you liked it.

thanks for this interesting and informative series, don! this view, with a nice diagonal across the river, allows us to appreciate the enormous extension of the structure!

Awesome shot of this beauty! Now on my bucket list....